4 years ago, a group of anime bloggers set up the Anime Blog Awards. They were a sort of anime blog oscars, where bloggers submit blogs for various categories and vote for the best. There was some initial interest in the nomination stage, but the actual award stage came under heavy criticism for being just an excuse for the big boys to pat each other on the back, along with many people barely even noticing that the final results had been posted. There were plans to run the awards again next year, but that never came to pass. Two years later, a discussion on twitter about the pros and cons of the ABAs led to the creation of the Aniblog Tourney. The idea was to make something like the ABAs except more fun and engaging.

END_OF_DOCUMENT_TOKEN_TO_BE_REPLACED

Result will be released on the 7th July 21:00 GMT, one hour after the polls close.

Whiners.pro vs Lost in America 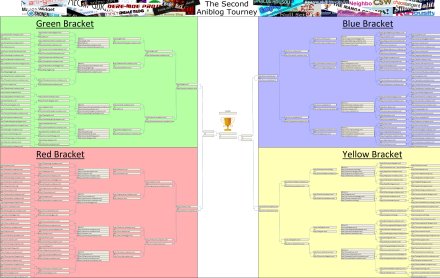 Empty Blue vs Lemmas and Submodalities

Caraniel’s Ramblings vs Those Damned Cartoons 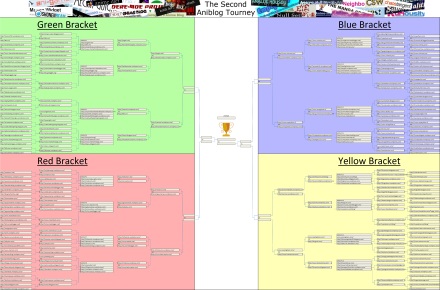 Note there will be a change in how the polling works (again). The results of each match will be hidden until the match ends. While this may take away from the experience of watching tight matches run to a close, it also prevents the results from having an influence on which one you vote and this makes it easier to deal with fraud voting.